A series of thoughts, stories and ideas.

The Importance of Company Culture

What is company culture?
Company culture can be defined as a shared set of values, beliefs and rituals that govern the way a business is run. From Entrepeneur.com: “whether written as a mission statement, spoken or merely understood, corporate culture describes and governs the ways a company’s owners and employees think, feel and act”.

Everyone knows that a good team is more than just the sum of its parts, and a good company culture embraces the individual rather than requiring uniformity. Your team is like a machine; each part performs a specific function, yet they work in harmony to get the job done. The key is to hire people whose personalities and skills complement one another, so every new addition to the team becomes integral to the business as well as increasing your company’s productivity.

One company that repeatedly stresses the importance of company culture is Buffer, the team behind the popular social media scheduling tool of the same name. Since starting the business from his Birmingham bedroom five years ago, CEO Joel Gascoigne has expanded his team to over 40 individuals (at the time of writing), and will not hire someone who doesn’t fit in with the company’s 10 key values. The Buffer culture strongly focuses on positivity and self-improvement, and their dedication to transparency and openness means they’re happy to share this via their blog. 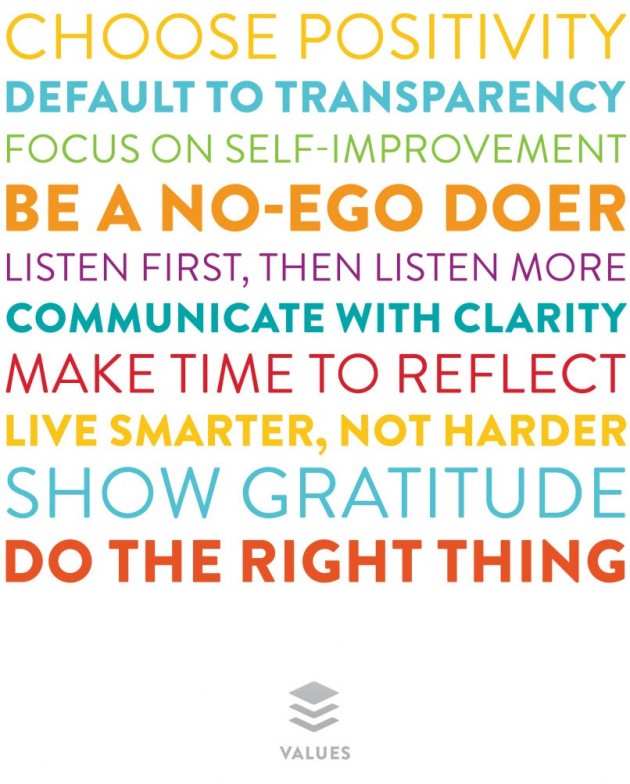 Buffer’s company values
The benefits of a strong culture
A well-developed company culture is adhered to by everyone within the organisation, which leads to a greater sense of community and ensures everyone is singing from the same hymn sheet. This means that all communication, be it internal or external, is strengthened as a result. The benefits of a strong company culture can be felt throughout the business:
– Recruiting is simplified and more successful because those involved in the hiring process know what they’re looking for in prospective candidates.
– Employees feel more valued, and are therefore more likely to remain loyal to the business. This also results in an increase in motivation and productivity.
– Morale increases across the board, which creates a more pleasant working environment.
– Those in leadership positions have a clearer sense of their role and responsibilities.
– A strong culture can be apparent during dealings with customers and suppliers, which could improve a company’s relationship with other businesses they work closely with.

At TKStarley, we’re strong advocates of company culture. It’s something we try and stress to all of our clients as well as implementing in house, especially as our team grows. We’re nowhere near the size of Buffer yet, but we have made two new hires in the past three months, and are currently recruiting for a front end developer to join the team. As we grow, we know that the culture we have in place now will change and evolve with every new addition to the team, and we’re looking forward to the future!